Much is being said today about the state of the union here in America. If you’re following along you know that fear,anger,resentment,and a general feeling of hopelessness prevails.Daily outpourings of outrage over this,that,and the other are the norm. 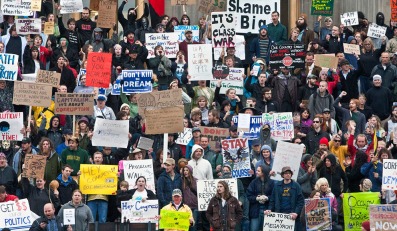 Lost in the disarray of all of this is the fact that America is inching ever closer to becoming just like the rest of the world. Let that sink in for a moment.

We’ve been sheltered,for lack of a better term,from the storms of unrest that have ravaged nation after nation.What we are seeing now,however,is the dismantling of that protective shelter right before our very eyes.

For decades we have witnessed other parts of the world reeling from countless famines,wars,diseases,and drug infestations,often of biblical proportions,all resulting in untold millions of deaths and incalculable suffering.

Tragically,they have been happening for so long that they have almost become normal. Besides,those things happen to them,not us. Short of a nuclear attack,little else gives us cause to stop and listen to what’s happening across the globe.

Meanwhile,we in America have watched these events unfold from the comfort and security of our recliners,smug in our thoughts that somehow we were anointed with “favored nation status”.Secure in our self righteous ideology that America was God’s favored nation,we were above such affliction.

Things are about to change.

I have also been very critical of the Church’s reluctance to confront the spirit of the age,and have drawn the ire of many for my position. Regular readers of this blog know that I am of the firm conviction that the Church of today has abandoned the faith once delivered to the saints (Jude 1:3),hence its reluctance to speak about the spiritual and moral back sliding we are witnessing.

For the most part what’s been said in pointing this out has been in vain…no real surprise there. After all, who wants to listen to some guy telling us that we need to “right the ship” by encouraging America to return to the God of the Bible?

It’s not very popular being one of those voices imploring our religious leaders to denounce the “sin which has so easily beset us” (Heb. 12:1). Then again,God didn’t call us to enter a popularity contest,did He?

Really,is it any wonder that a feeling of hopelessness permeates every facet of our nation? Even the most positive must admit that things don’t look good. We sure could use a little hope right about now,couldn’t we?

Which brings me to the title subject of this particular blog, Our Invincible Hope. Yes,in spite of everything you’ve just read,there remains a flame of hope that cannot be snuffed out by the angry,vitriolic protesters in our streets. A hope that cannot be voted out or decreed null and void by an executive order.

No,in spite of all of this we have a hope that is without end. It is because of the Resurrection that we have this Invincible Hope. Because of Jesus Christ all men everywhere have been made alive,and in the heart of every believer beats the drum of Invincible Hope. For all of us,a better day is coming! As Paul writes:

If in this life only we have hope in Christ, we are of all men most miserable.
But now is Christ risen from the dead, and become the firstfruits of them that slept.
For since by man came death, by man came also the resurrection of the dead.
For as in Adam all die, even so in Christ shall all be made alive.
But every man in his own order: Christ the firstfruits; afterward they that are Christ’s at his coming. I Corinthians 15:19-23

If in this life only we have hope in Christ then we are in serious trouble! So many people are fixated on this life,as if this is all there is! We expect those outside the church to behave this way,but this mindset has enveloped the church as well!

We are so caught up in the concerns of this life that we are forgetting that this life is but a vapor (James 4:14). We aren’t here long!

We must be on guard lest the desires of our hearts shift away from the eternal to the here and now.

We can never abandon Paul’s admonition of “If in this life only we have hope in Christ, we are of all men most miserable”!

The tragic events I have described in this post hang over mankind like thick darkness,much like the Egyptians must have felt just before God delivered the children of Israel. A sense of doom and foreboding has cast fear into the hearts of billions.

America,indeed the entire world is on the precipice of an implosion the likes of which this world has never seen, and we seem incapable of looking beyond this in order to see the splendor that awaits us. And truthfully,we haven’t seen anything yet.

Christians must reconnect with the truths of God’s Word that reminds us that perfect love casts out fear (1 John 4:18). That’s right,the perfect love of Christ repels fear and does not permit it to engulf us. Fear may reign in the hearts of those focused only on this life,but it has no hold on those looking for the promise of His coming.

It is the Resurrection that offers the promise of hope,of what God will do for each of us. For you see, God isn’t just offering possibilities to us,but rather the inevitability of a life far removed from the carnage all around us. I don’t know about you,but “as for me and my house” (Joshua 24:15)…

Our Invincible Hope! Grab hold of it!

2 thoughts on “Our Invincible Hope”

Join 193 other followers
Follow A Front Row View of The Church on WordPress.com